The (almost) trip to Giverny...

Today I'm going to tell you a story. This isn't a fictional story but a true story from my travels. So, settle in with your cup of coffee, or hot tea, as this will take a while

As I have mentioned many times, I have had the privilege of traveling to many places worldwide. And like the fictional Kate in The Medici Warrior Series, Paris, and much of France, remain one of my favorite places to visit.

I have a dear friend named Sandra, who went with me on all my trips to France. Now, the thing to know about Sandra is that even though she is a wonderful friend, she is a world-class klutz. She will not be offended by reading this. She would be the first to tell you she should be in the Guinness Book of World Records for the number of times she has tripped, fallen, dropped things, bumped into things; you name it. She is a disaster waiting to happen, but it always makes for an exciting travel experience!

After spending several days in Paris, we rented a car and toured the French countryside. On our way back to Paris, we decided to stop in Giverny. It's a small town just outside of Paris and was home to the famous impressionist painter, Claude Monet. She happened to be driving, and I was flipping through the guidebook and noted that "Giverny was closed on Monday." We discussed whether to stop; when I said, "Giverny is a town; how can they close the whole town?" It seemed like a logical argument at the time, so off we head to Giverny.

We followed the signs through the small village that marked the way to Claude Monet's home and gardens. We arrived to find an empty parking lot and a massive wall around the entire estate. A "normal person" would have just sighed at this missed opportunity and gotten back on the highway to Paris. But we are not normal people. We got out of the car, me with my camera (pre-cellphone days, people), and walked to the very tall, very imposing solid metal gates. There was the smallest crack where the doors of the gates met, and we had our faces smashed against the metal, trying to peek inside. We could see the slightest hint of the house and enough of a tease of the glorious gardens he used for inspiration in many of his paintings to keep us intrigued. Surely, there MUST be a means!! We started walking around the estate, surrounded by an imposing limestone and rock wall. Sandra kept running her hand along the wall, which had rocks jutting out from the uneven surface, and said, "I bet I could climb over this."

Now, at this point, alarm bells should have gone off in my head. After all, this was Sandra we were talking about. But no... those bells remained silent as I encouraged her on. She handed me her handbag, which I slid over my shoulder with my own bag, as she started to climb. She said, "I'll get to the top, then you hand me your camera. We won't actually go in, so we won't officially be trespassing." In my addled brain, I'm still thinking, yes, this all sounds perfectly reasonable. She had ALMOST made it to the top of the wall when the rock she was standing on broke under her foot, and she came tumbling down. I was standing right beneath her, my one hand extended, holding the camera out to her, when she came crashing down on me. She knocked me off balance, and I stumbled backward off the sidewalk and into the street, struggling to maintain my balance and not fall, and let go of the camera in the process, as both purses fell off my shoulder, spilling their contents in the middle of the road. I heard Sandra scream out, and I looked back to see blood pouring over her face as she had hit her head, just above her left eyebrow, on the curb of the sidewalk. I grabbed a bunch of tissues from the contents of our purses, and went back to her and was trying to apply some pressure on the gash in her head, but now we have a traffic jam of people who have stopped their cars so as not to run over the crazy Americans who have their purses, and a camera, in the middle of the road, and a really cute French jogger, who just happened to be running by at the time, who had doubled over in laughter and was lying in a fetal position by the road. (I get extra points for noticing how cute he was even in the midst of total chaos).

We finally got the bleeding stopped, gathered our things, and got back to the car. She really needed about three stitches, but she said there was no way she was going to an ER and saying she fell off the wall at Giverny. So, we headed back to Paris, where we checked into the Ritz (a hotel I couldn't afford, but a good friend had gifted me with a three-night stay).

The next day, Sandra had a black eye, and to this day has a lovely scar above her eyebrow to remind her of her adventures in Giverny.

For you, my readers, here are the photos of Monet's home and the gardens surrounding his house that Sandra and I never got to see in person! 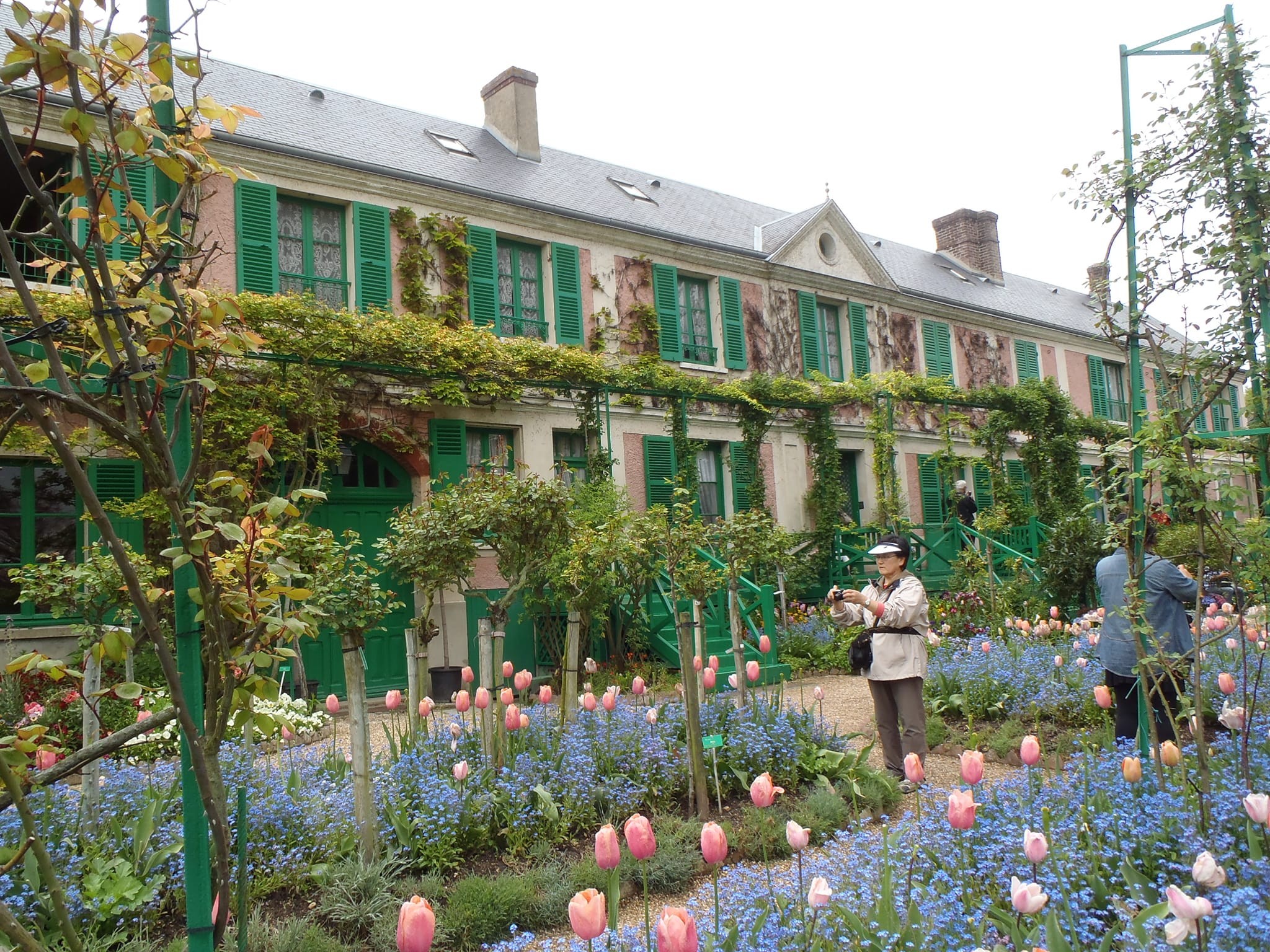 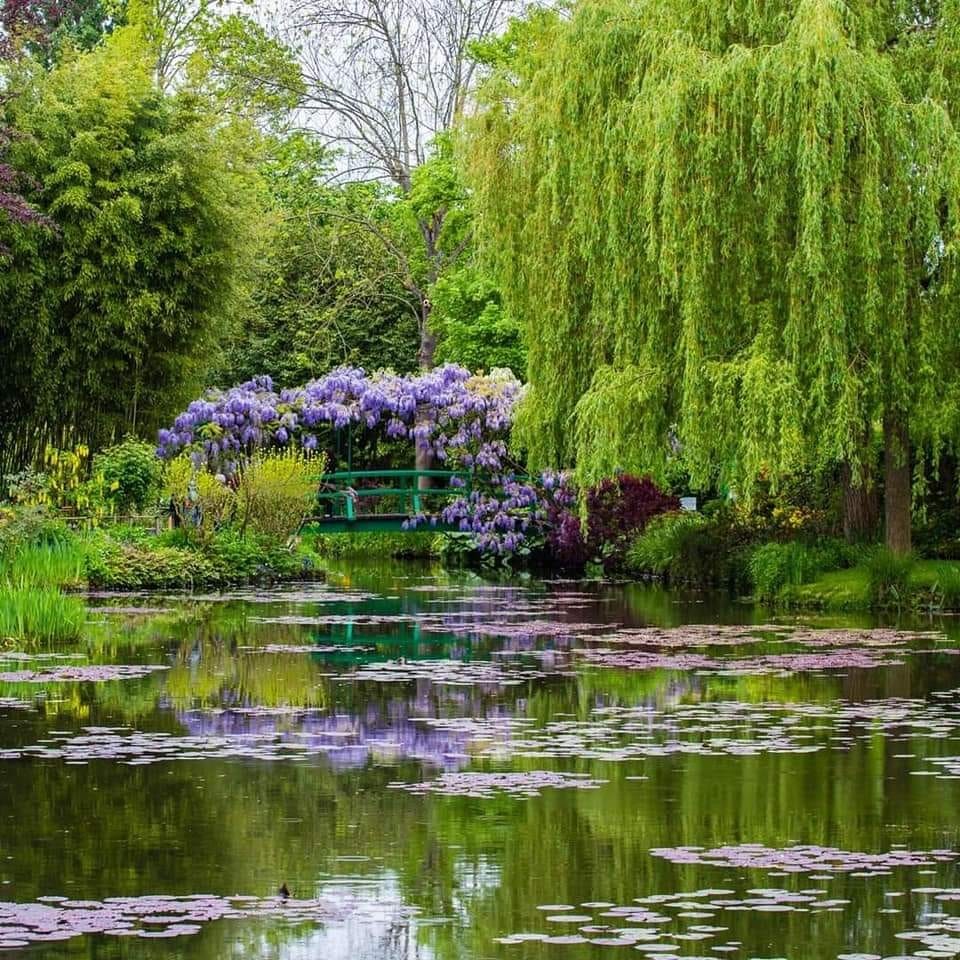 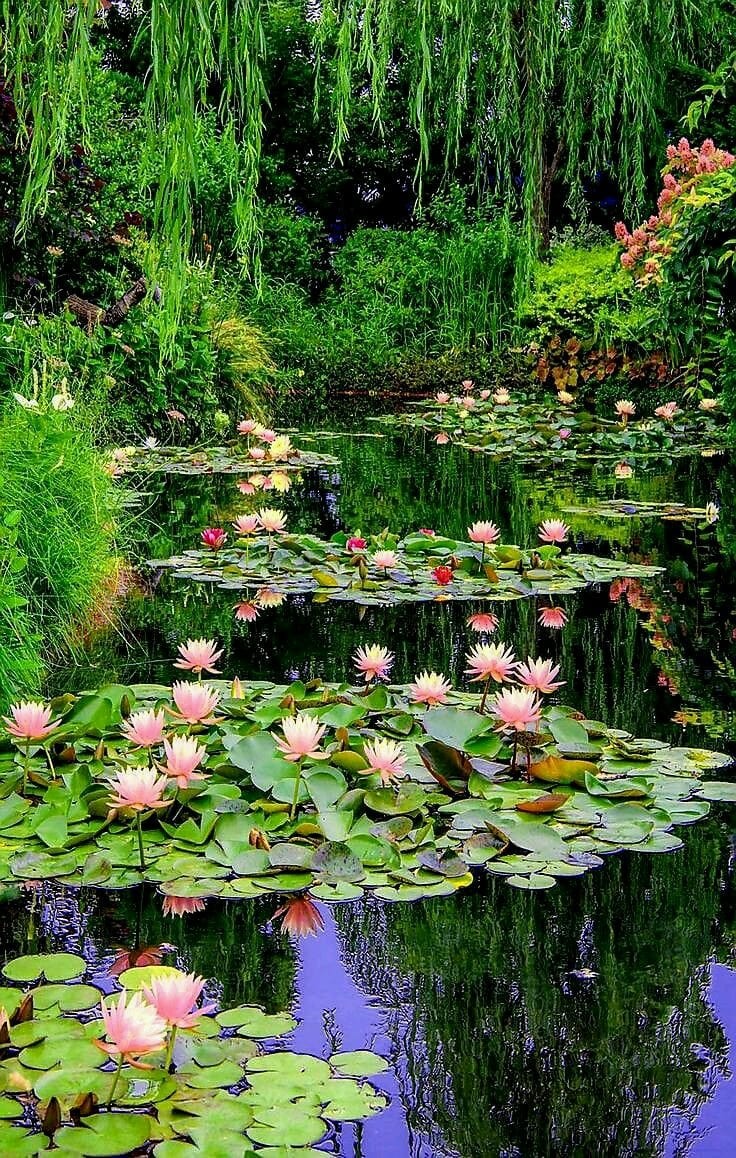